The practice of carrying Colours of Uniform design to identify each regiment and provide a rally point in the confusion of battle commenced in 1639. The Colours were carried in Battle in the centre of the front rank between the centre companies where they could be easily seen and recognised. This had a highly moral raising effect on the spirits of the troops. It also meant that the once battle parties were joined the Colour Party became an obvious target and the centre would see the most bitter fighting.
Since 1751, regiments have been allowed two Colours only; the King or Queen’s Colour and the Regimental Colour. Although no longer carried into battle, Colours remain the symbol of the Regiment, for on them are born the battle honours granted in recognition of gallant deeds performed by its members.
The Regimental Colours of the 39th Battalion rested for many years in Anglican Christ Church Cathedral in Ballarat, later to be placed in the Crypt of the Shrine of Remembrance in Melbourne, where they now remain in perpetuity.  They bear the Battle Honours of the battalion in both World Wars.

The custom of dedicating and laying up Colours in churches and in memorials has its origins in antiquity.

Colours themselves originated from the days of early man who fixed his family badge to a pole and held it aloft in battle to both indicate his position and to provide a rallying point for his troops.

Regardless of origin, design and form, Colours and the insignia are symbolic of a fighting unit’s spirit and a visual record of gallant deeds performed by the members of the unit. These are recorded by reference to the location of the deed and on Colours are called Battle Honours.

The custom of laying up the Colours has dictated that a regiment’s Colours should be preserved in the appropriate church of the town with which the regiment was identified, providing as it were a link with eternity. The visual presence of the Colours in a church make it possible to rally future generations and to remind those who have not had the experience, of the heights to which the human spirit can soar as a group of resolute men channel their convictions into sweat and sacrifice for goals deemed worthy.

Guidons, swallow-tailed pennants borne on a lance or a pike, are the Armoured Corps’ counterpart of Infantry Colours. 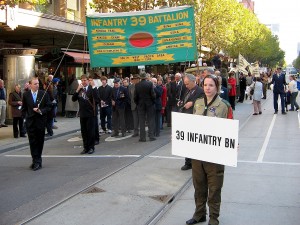 (Above) A 39th Battalion contingent with banners at an ANZAC Day parade.

Associations of returned servicemen have also designed banners which are used as rallying points for ceremonies of significance such as ANZAC Day and other memorial services. These too are symbolic of the unit’s spirit, and its service.