The following story was submitted by his daughter, Margaret Shanahan. 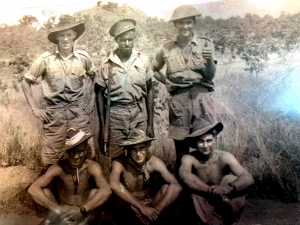 James is top left of the photo.

My father grew up in St Arnaud in rural Victoria. His father died when he was 7 years old and his mother eventually married another man. My father was the eldest of 6 children and became like a parent to his siblings who all deeply loved and respected him. Sometime during his childhood my father moved to Carlton with his family and then decided to join the army at age 17.

After enrolling in the Army and completing his basic training at Bacchus Marsh my father said he was put on a bus with other soldiers but had not been told exactly where they were going. They thought they were going to fly to somewhere in Europe. They were then driven to the airport and put on a plane and to their surprise landed in Darwin. After this they were flown to New Guinea to stop the Japanese advance on Port Moresby. He then became one of the Chocolate Soldiers of the 39th Battalion who fought on the Kokoda Trail with his fellow comrades whom my father said he was very protective of. Their mateship for one another was of significant importance and without this my father thought many more would not have survived and Australia would have been invaded.

In October 1942 he was diagnosed with Malaria in New Guinea and had to be flown back to Melbourne to be medically treated. He was then admitted to the Heidelberg Repatriation Hospital where he remained an inpatient for a few months. Prior to this he had been diagnosed with dysentery and had a medical history of rheumatic fever. He was also diagnosed with mitral stenosis in October 1943. His body just looked like skin and bone when he returned home and was told that he only had a short time to live. He however survived and later married my mother, Elva Jean Reade, who had been a WAAF in the Air force prior to them meeting. They had 10 children within 14 years and were great parents who raised all us children in what became known as Little Chicago in East Preston in Melbourne’s Northern suburbs. My father worked at Kodak throughout my childhood and was an extremely hardworking man and a good provider.

My father eventually died when he was 78 years old from bowel cancer. About 6 months before he died I said to him, “dad you are going to die without telling us about what happened to you in Papua New Guinea” He then said to me, “Margaret, how would you feel if you had to watch your mates be killed and had to kill people”. I completely understood how painful this would have been and still was for him so did not pursue the conversation any further. He also had nothing else to say. Throughout my life he couldn’t even talk about the Japanese and didn’t liked Japanese cars. I felt very sad about my father’s wartime experiences and what he’d witnessed and been exposed to. He however maintained his care of others and enjoyed a beer. He also for a while became President and Social Secretary of the Preston RSL, and always participated in the ANZAC march. I have always felt incredibly proud of my father, as do all my 9 siblings, 3 children, and his 34 grandchildren who know his story. I’m sure that his great grandchildren when they are informed of his important contribution to Australia will also be proud of him, as are many other Australians who have appreciated the 39th Battalion’s significant contribution in stopping our country from being invaded during the 2nd World War.     Lest We Forget.